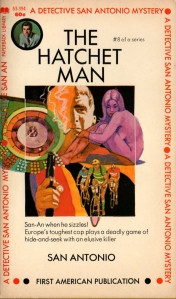 The American publication of San-Antonio novels in the early 1970’s  consists in mere reprints, with  different covers (but the same illustration)  of the translations published in England in the late 1960’s.   Most of the translations are from  Cyril Buhler. What is original on these “First American Publications” is the blurb, printed on the cover. Here, this most hyperbolic of commercial communications takes place, not only on the back page as is traditional, but on the front page already, for maximum attention.

Thanks to a decision by the  American publisher, Paperback Library (New York), San-Antonio was to have there his own series (“A Detective San-Antonio Mystery”). This is more than was  for him  the case in France at the time, despite his colossal success. His books were still part, together with dozens of other author’s of the famous “Spécial Police” (Fleuve Noir) series. Only after the precedent set in America (and in the same year, in Italy) did the San-Antonio series obtain in France a collection solely devoted to them.

Another distinctive feature of  this American publication, is that each book in the series presents a one sentence headline qualifying the character, and the impact anticipated from his books… Read together, these headlines make for an interesting, if composite portrait of San-Antonio (click on the pictures below to read the texts). One longs to learn more about ” The anti-establishment Hero” who is, at the same time, “Europe’s toughest cop”. But one can’t help wondering how his books,  which are in essence parodic of the genre and devoted mainly to testing the limits of expressivity in the French language can possibly live up to this billing. 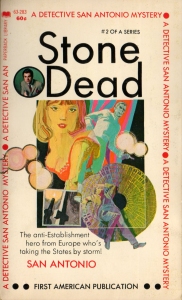