The 1930’s and 1940’s registered an abundance of Crime Fiction series in France. They are treasured today by collectors. Often this interest owes more to their cover art than to the crime stories themselves. This is perhaps unfair, as there are many great stories there. But the cover art is indeed remarkable.  Here are a few  examples from these iconic series.

The Series  Disque Rouge (Red Circle)  can be recognised  by its sunset-like logo featuring on the covers as if part of the illustration. These are by famous artist  Maurice Toussaint (1882-1974). The series were devoted to adventures novels, but published a number of thrillers and mysteries, including Hornung and several of Sherlock Holmes adventures, totalling some 50 volumes between 1932 and 1934.

This series published authors such as M. Allain and J.L Sanciaume. The covers had a distinctive green/verdigris and red colouring, which predated that of The Série Blême Gallimard, in the late 1940’s. The celebrated Artist Louis-Félix Claudel (1895-1948), a gold award winning illustrator collaborated to “La Tache de Sang”.

As its title suggests (The Key), this series of 44 volumes In-16 format published between 1938 and 1947 by Rouff was devoted to  the mystery genre.  The detective novel is conceived as a riddle. The motivation of the reader is to find the key of an enigma.   Most  of the authors published here were English : Charles Barry, Philip MacDonald, Victor L. Whitechurch, Anthony Webb. But during the occupation of France they were replaced by a  handful of French authors.   Léon Groc, (1882-1956),   Andrée Forny, Alexandre Bonnel, René Lécuyer, Sylvain Roche… some wrote under a pseudonym, like Ludovic Fortolis.  Most are now truly forgotten. 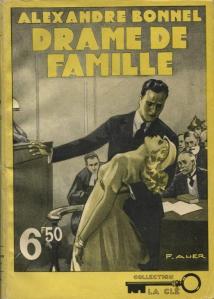 “Le Lynx” was  a series from the leading popular fiction publisher Tallandier. It was led by Rémy Dumoncel. The book covers were designed by well-known artist Maurice Toussaint (1882-1974), already mentioned above for his collaboration to Le Disque Rouge.  Out of the 29 books  in this series, 10 are by Anglophone authors, including Peter Cheyney and Victor L. Whitechurch, and the Australian James Morgan Walsh. Walsh’s 1938 novel Dial 999 was published in this series in 1940 as Un drame de la Gestapo (Le Lynx, n.5). Other authors include Magog, Muir, Groc, and Duvic. 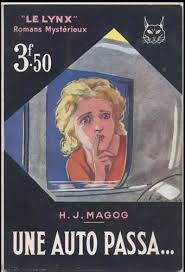 This  is one of the most iconic early French Crime series.  Its director was Louis Chavance,  the screenwriter for Clouzot’s Le CorbeauI.  It is famous for the cover art by Illustrator Robert Dansler.  Publisher Georges Ventillard had begun in the 1930 to acquire a number of well-known French popular culture symbols such as the Almanach Vermot, or the Pieds Nickelés adventures. The idea for Minuit was to publish French authors with Anglo-American sounding names. While the preceding decades had established the popularity of English language Crime Fiction authors in French translation,  the war and the French occupation made it necessary to find French surrogates.  Starting  in 1941 with  “Le mystérieux Mr. Rankin”  by Irving Ford ( Pseudonym of Louis Chavance) the series published 24 novels until 1949, the last by English author John Creasey. in 1949. This was  where Léo Malet first  published his hardboiled novel Johnny Metal (1941) under the pseudonym of  Frank Harding. Malet published further here, as Frank Harding and as Léo Latimer, La Mort de Jim Licking, Le dé de Jade and  Recherché pour meurtre.

The series is famous for Léo Malet’s  120, rue de la Gare  and further novels by Léo Malet, as well as by Jean-Louis Guillaume, Jean le Hallier (aka L. Boisyvon, aka Monchanin), Lanteaume,  Narcejac, André Noël,  Luc Rivière and M. Silvio (aka Pierre Gamarra). This is how the first edition of the first French roman noir looked like. 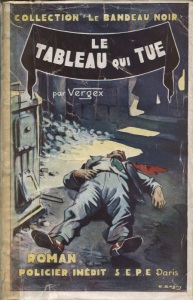 This series was published in Lyon. Lyon was liberated in September 1944. During the occupation of France, a number of  Parisian Newspapers had relocated there and writers who depended on their  activities as journalists had followed them.  Many of the authors published in this series  (Warnod, Dazergues, Géo London) have had a formative influence on a young Frédéric Dard, with whom they were associated during that time in Lyon. Dard  went on to create briefly his own publishing house, collaborate to a later Crime Fiction collection based in Lyon (La Loupe) and  became France’s most successful writer. 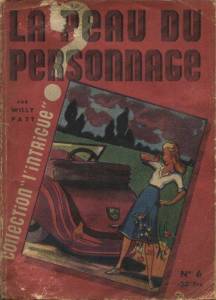