San-Antonio adventures outside from France take the narration to 17 different countries in Europe alone. There are visits to Germany in seven books, including two in the  German Democratic Republic in the 1950’s.  What are the countries of predilection,  for the narration? Which ones are the most recurring,  trusted, matrix of  textual production? How are these destinations of a series of adventures related to political, diplomatic and cultural events, trends and epochs  in European  History ? How meaningful are they for the creation, and in the dynamic of the series?  What  does this say about the series’ ideologies, and  how does this affect our reading ? 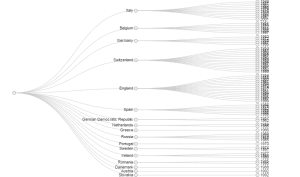 This tree uses the Reingold-Tilford algorithm (thanks to Raw open technology).  The arrangement of layers of information lists in a clear and efficient manner all of San-Antonio visits to European Countries over the course of fifty years, indicating the dates for each  (based on the date of publication). This mode of representation helps separate countries of lasting interest (England, Italy) from ones where the series is rather just passing through.  The dates are often telling, especially in cases of countries standing between regular visits and single occurrence. Such is for example Ireland, with only three visits in fifty years, but all during the same period, between the mid-1970’s and mid-1980’s. It becomes easier to look for contextual factors which might be correlated with this  sudden diegetic interest. 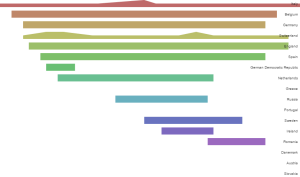 Further, the small multiples chart above represents the full extent of the duration of  the series engagement with each European Country visited. It establishes  a long lasting  interest for Italy, from the first book to the last. It shows an interest almost as long for Belgium. By contrast, it details cases of an interest very limited in time (the GDR) or a simple (and exceptional) passing through a country, as a secondary, or third location for the plot (Slovakia). The series of small similar graphics  allow thus for easy comparisons.

The Streamgraph above shows the most visited European countries over the total period considered. The timeline allows to highlight the existence of a continuous  stream of data.  On this time series (from 1949 to 2000), Belgium  is in Black, Italy  in Pink, England in light Green, Germany in Verdigris, Switzerland in light Blue.

This Dendrogram is helpful to visualize the countries traveled for any given year.  The two depth levels represented by each node make this diagram very useful to correlate simply a given date with a range of places.