Noir Fiction is a literature of affects. It depicts passions, surprise, anguish, despair, and tragedy. Exclamation marks are a  way of expressing and highlighting these  feelings and tensions textually. Orders are shouted, threats are uttered, insults are exchanged. Cruel realisations are made, usually too late. Wrong turns were taken. Fortunes are lost. Lives come to an end.   Exclamation marks, in the San-Antonio novels, stress  the urgency of the plot and the impulsive, ill-tempered nature of the first person narrator. They suggest his lack of restraint. They mark his own accentuation, they force his own tempo. Like a music conductor, the author dictates the rhythm of his score. San-Antonio’s tendency to “over-ponctuate” is manifest.  Exclamation signs can be found both in the narration and in  the dialogues.  They  even find a way into the paratexts, in the titles, including the titles of chapters (Chapter XIII of Du mouron à se faire (1955) is ominously titled :” OH! OH!”). But how can machine- reading a text confirm and help refine this empiric observation made by the reader ? How many times, exactly, does San-Antonio use the exclamation mark in each of his novels ? Are there patterns, is there an evolution?  The following is the data that a computer, reading some novels by San-Antonio will find.  Of course, such a reading is very crude and does not account for the context, of which much meaning of the exclamation depends.  But  even when grasped only as mere quantities,  the number of exclamations seem to indicate some pattern.

Number of exclamation marks in early works by San-Antonio 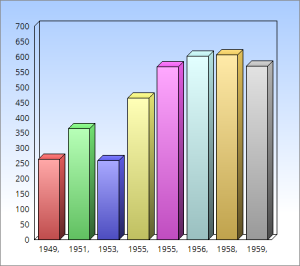 Certainly, such comparisons only make sense in proportion to the respective length of each book. It is  necessary to compare the number of exclamation with the total word count for each  book. Yet, crime fiction experienced in post war France  a well known process of standardisation.  Novels formed part of publisher’s series. It was essential that they would fit in. Number of pages tended to remain constant.  Format and page numbers were harmonised in order to rationalise  distribution and display.  Such conformation to industrial standards is at play in the early stages of San-Antonio’ s career with the Fleuve Noir.  The  texts length remains similar from one  book to the next.  For example, C’est mort et ça ne sait pas (1955) is roughly 40 000 words long.  Du plomb dans les tripes (1953) was 42 000. Les Doigts dans le nez (1956) about 38 000 Words.  If the length of books remains stable or slightly decreases, the number of exclamation rises rapidly. At this stage already, without further enquiry, a growing tendency to use interjections seems established.

The quantitative jump is the most radical between the first  novels in the series.

Réglez-lui son compte (1949) published by Jacquier, in Lyon, has 264 exclamation marks, but the novel is 63 000 words long. Les souris ont la peau tendre (1951), published in Paris, the second San-Antonio published with Fleuve Noir, not only has 100 more, with 364 exclamations, it is almost 30 000 words shorter (at under 36 000 words). The average number of exclamations does  here more than double, between the first book and the third. Not only are the book standardised, when published with an industrial publisher. The style changes, too.

This tendency to exclamative inflation in the texts is on display on the covers as well. In  some cases, the occasion of a re-edition leads to adding an  exclamation mark, which did  not feature in the original title. There, the exclamation reveal its contractual nature. The interpretation of the text does not belong anymore to the author, but to the publisher, who  adds this emphasis. 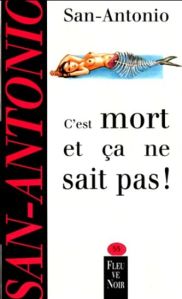