The “Angoisse” Series comprised 261 novels,  published by Fleuve Noir between 1954 and 1974.  Much in the same ways as Gallimard’s Série Blême offered a different blend of noir and suspense from that of its more successful sister, the Série Noire, Angoisse is a series devoted to Stories of Dread, and Psychological Suspense.  The heritage of Edgar Poe is manifest. Albeit putting greater emphasis on terror and fantasy literature, this series is in many respect a companion to the great Special Police series by the same publisher. Books in the Special Police Series carried advertisements  like the above for the “Angoisse” series.   “Angoisse” was the place were classics such as   J. Redon’s Les Yeux sans visage (“Eyes Without a Face“, “Angoisse” number 59, later a famous film by Franju) were first published. Many distinguished authors published in Angoisse : Marc Agapit,  Maurice Limat, Kurt Steiner, B.R. Bruss,  and  André Caroff. 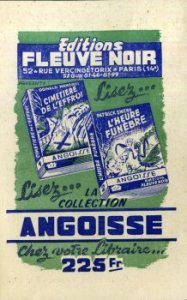 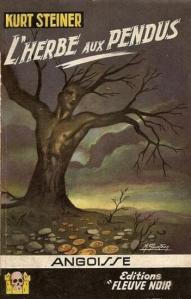