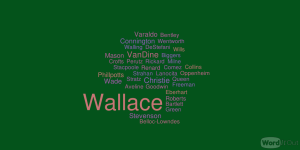 The proportional Word cloud above shows the influence of  British authors in  Italy. It is based on the numbers of their books published in Italian translation in the leading Giallo Mondadori Series, which was launched in 1929.