The Ullstein Verlag, founded in Berlin in 1877, was one of the most  active  and successful agents on the market of entertainment publications in Germany. One year after Le Masque in France, and one year before Mondadori, in Italy, it too launched a series of yellow mass market Crime Fiction books : Ullstein Gelbe Reihe was started in 1928.

It is immediately apparent, thanks to the visualisation above that the route chosen by this publisher is very different from the others. First, the series is not strictly devoted to Crime Fiction. It publishes adventure novels more generally, a number of them pertaining to Crime Fiction.

German authors are by far the most represented. Some of them  are (in-) famous, like Thea von Harbou, the screenwriter of Metropolis,  and Fritz Lang’s wife. Luxembourg German author Norbert Jacques’ Dr Mabuse Der Spieler was republished in this series (the first edition was also with Ullstein, in 1920). English authors, by contrast are very rare here, in total disproportion  to their international importance.  Wallace first appears in 1930. French authors feature early: the first volume of the new series is Maurice Dekobra. then branded as ” the most famous French author in the world”. Leroux’s Phantom of the Opera was published there in 1928, with, on the book cover, a picture from Lon Chaney, taken from the 1924 Hollywood  movie, and the mention Kriminalroman.

The  series had already  published some 170 novel, when it was interrupted in 1933,  after  the election of the Nazi party 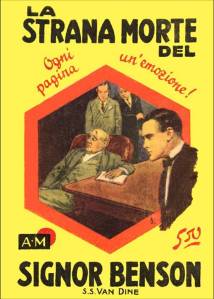 The first edition of the first book published in the “Giallo”, Mondadori Series, 1929