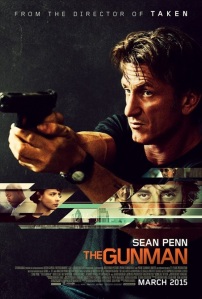 It would be severe to assess the value of The Gunman, the blockbuster featuring Sean Penn, for its own merits as a work of art, in its chosen medium. For these are slight, and the movie, literally does not stand, artistically,  on its own feet.  A slow action film, a soporific thriller, an inane rant on global politics, a waste of star-talent, it is just a very forgettable offering.   A kinder –  if  critically and theoretically debatable –  way to evaluate it  would be to measure it against the Prone Gunman, the 1981 novel by Jean-Patrick Manchette it is adapted from. Not in term of accuracy, or faithfulness, as this is not the point, and the merit of a successful adaptation is always to produce a work which significantly differs  from the work adapted. But rather, in order to assess its value in terms of depths and echoes, of levels of meaning it can reveal, and of productive (or not)  intertextual interplays it can trigger. On that account, the movie is not uninteresting : 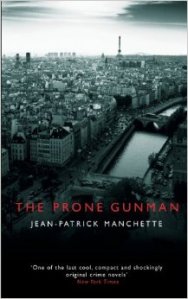 But it suffers from four  regrettable choices :

– Exit the gunman, enter the cowboy.

Manchette’s prone gunman, is a poor, lonesome, anti-cowboy.  He is a noir anti-hero. The noir and the western are two very codified genres, and it is easy to see that, formally, aesthetically and historically,  one is the negative of the other. In Manchette’s novel,  Martin Terrier is an epitome of the failures of machismo, his whole personality is constructed to undermine, to reflect negatively on masculine bravado. In the movie, the insistence on playing the character of “Jim” Terrier in the  free-shooting, all muscle, cowboy mode deprives him of any substance. The character is undermined by this contradiction.

– Replacing social critique with an illusion of political awareness

It is apparent that some consideration was paid to the political dimension of the text adapted, and that some sort of equivalence was sought. This is therefore not a case of carelessness but of incompetence, as a very solidly grounded and easy to verify social critique is here replaced by a mere decoy, a pretense of political conscience, which rings perfectly hollow. The  emptiness of the film’s politics is a severe indictment of  the ideological garbage that passes for critical thought in Hollywood.  Vague criticism of big corporation and the role of economical interests against democratic expression is hardly enlightening. Isn’t it obvious ? And  it is quite unlikely to raise the audience awareness to political manipulation. The book is an eye-opener,  which reveals the working of ideologies within societies and how it informs the agents’ s behaviour. The movie on the contrary forces the eyes of its viewers shut, when it does not literally plunge them into lethargy, catalepsy, and sleep. Its political content is so safe, tepid and dull as to be truly insignificant.

– Making a  blockbuster out of a book  which critiques the society of the spectacle.

In the novel, the authors describes in passing a movie house programming a film with Charles Bronson, “or  a similar piece of  junk”. The Gunman is such a similar, generic, unnecessary entertainment movie.  It is so cut off from any reality or link with any real existing social conditions that it even fails to entertain. With The Gunman, the spectacle strikes back.  The factories of  mass stupor  that keep producing  such tired narratives which  no one in particular wants to watch,  are showing here  their naive belief in their own ability to assimilate and neutralize any criticism under layers of meaningless pyrotechnics. How long will it take to realize that it might pay off to  try and take audiences seriously ?

-Attempting to draft  a linear plot, with a story which is essentially circular.

Trying to make an action film with a plot which is about entropy does not look like a great idea.  Failing to see that the  Prone Gunman’s construction is circular  (the “hero” is brought back to the condition he wanted to escape from) condemns the plot to try to follow a line leading nowhere.