Georges Simenon, 1903-1989: mais do que Maigret  is the title of the exhibition with which  the  Portuguese national library  currently ( 8th January to 18th April) commemorates the 25th anniversary of Simenon’s death. The exhibition shows  first Portuguese editions of his novels. These  were translated in Portugal from the early 1930s’. The curators of the exhibition contribute to understand the global (and intermedia) appeal of an author who, with 550 million copies sold, ranks as the third most widely read French language writer, after Jules Verne and Alexandre Dumas.

The first Portuguese translation of a work by Georges Simenon  was  the novel  Condenado à morte (Sentenced to death, for La Tête d’un homme, 1931) , published in 1932 in the Os Melhores Romances Policiais  Series, directed by Adolfo Coelho, for the publisher Clássica Editora. By the end of the decade, Simenon’s success was such that he  was published in a separate series : Romances policiais de Georges Simenon (Empresa Nacional de Publicidade). One of his most  popular novels, The Yellow Dog , translated by Adolfo Casais Monteiro started the new series.

For more information on the BNP and the exhibition : 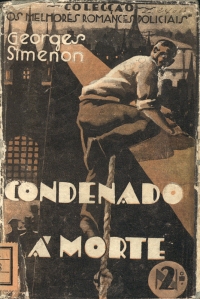