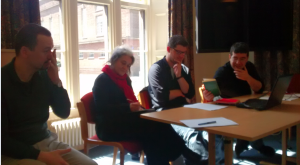 The San-Antonio International conference took place last week end  at Queen’s University, Belfast, under the aegis of the Institute for Collaborative Research in the Humanities and the School of Modern Languages. It gathered specialists, scholars, collectors and members of the public from around the world. They came to discuss (in French, mostly) the immense body of work left by one of France’s most famous popular writers, Frédéric Dard, aka San-Antonio.  Joséphine Dard, his daugther, attended the conference and took part in the discussions. People came together who don’t normally get to talk together.  Genuinely multidisciplinary, the conference relied on  expertise from various fields (from American Studies to Linguistics, from Cultural History to Literature studies),   on  public and private collections, and on new digital tools.  The multiplicity of approaches and expertise allowed to  tackle precise research questions on a defined and contained (if vast) corpus of texts.

The study of San-Antonio’s oeuvre in its international dimension had never been undertaken before. Studies in literature still tend to obey (and reproduce) a  national paradigm. They rarely look beyond borders. Studies in comparative literature and translation studies, when they don’t discount popular literature, tend to focus on a small amount of comparators, usually two or threes.  Undertaking a global cultural comparison  is more than onerous : it adds more than foreign 700 books to the already huge body of texts by San-Antonio (all different editions considered, French and foreign, this amounts to some 3000 books). This necessitates time, resources, technology and a wide range of skills which can only be attained collectively. Digital tools are needed, in order to master the wealth of metadata publicly accessible; and  reading fluency in a number of  Modern Languages, in order  to understand these data; and a network of international experts and informers to analyse, interpret and  supplement them.

While San-Antonio is too often seen as a Franco-French phenomenon, his work  has actually been translated into 35 languages.   Dozens of titles were translated in Italy, Spain, Romania, but also in  Russia, and in Germany. There have been more than hundred of his novels translated into Italian. Approached in a systematic, global way, San Antonio’s work  presents an international dimension at all stages of its creation  and dissemination. Its models  are international, and especially British and American.  San-Antonio has engaged with many writers, directors and artists from other countries. Many French, francophone and foreign writers, from Georges Perec, to Yasmina Khadra and Massimo Carlotto  have enjoyed his work as readers,  and some of them  claimed  that it was inspirational for their writing.