The Catalan capital Barcelona is indisputably the crime fiction centre of Spain. Anglophone readers will no doubt be familiar with Manuel Vázquez Montalbán’s Carvalho novels, a series of over twenty novels and short story collections published between 1974 and 2004 that charted Spain’s transition from a dictatorship to a democracy and beyond. A city’s or a country’s crime fiction credentials, however, do not rest on one writer alone. Other writers who may be familiar to anglophone readers are Eduardo Mendoza, Andreu Martín, Alicia Giménez Bartlett, Toni Hill, Teresa Solana, and Marc Pastor, among others. While these authors hail from or live in Barcelona, only Martín, Solana, and Pastor write in Catalan. Although less well known to English readers, there is nevertheless a strong, albeit at times uneven, tradition of crime fiction writing in Catalan.

The development of Catalan crime fiction has been shaped as much by politics as by literary concerns. Following two centuries of the persistent imposition of Castilian (Spanish) in Catalonia, at the beginning of the twentieth century many Catalans were illiterate in their own language, while those that could read the language belonged to a well-educated class who preferred to read so-called high literature. To overcome this division, writers saw in the crime genre a popular form which could potentially attract readers, perhaps lacking confidence to read more “serious” works, to attempt more popular, less intellectually threatening novels in Catalan. According to Rafael Tasis, an early pioneer of the genre, “We need to reach an audience, to overcome the distance between Catalans and books, and if we aspire to mould their tastes one day, we have no other option than to make the first step and to cater to their preferences.”

The crime genre came relatively late to Catalonia. As occurred in other national contexts, the genre entered Catalan literature thanks to the popularity of Arthur Conan Doyle’s Sherlock Holmes stories, which appeared serialised in Catalan translation in 1908-09. These, in turn, led to the first Catalan imitators, including a poetic cartoon adaptation by Albert Llanas in 1908 and, a year later, a theatrical parody by Salvador Bonavia, El detectiu Jeph-Roch Homs [The Detective Jeph-Roch Homs].

The first known crime narrative written directly in Catalan was only published in February 1924: La meva mort [My Death] by Miquel Poal-Aregall. 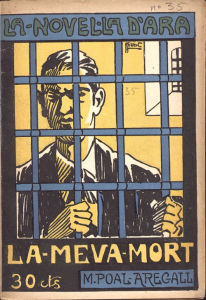 It was soon followed in August of that year by Jacint M. Mustieles’s L’assassí i el compliç [The Assassin and the Accomplice] and in April 1926 by Jaume Roig Solanas’s El misteri del bosc d’Aubac [The Mystery of Aubac Forest].

Although in the main poorly written, these short novellas foreshadow later trends in Catalan crime fiction. They articulate a distinct lack of trust in the institutional system of justice, and criticise Iberian masculine honour codes and the treatment of women. Within this short crime fiction tradition, Domènec Guansé published Com vaig assassinar Georgina [How I Killed Georgina], a collection of nineteen crime stories in 1930.

The first full-length Catalan mystery novel, however, was El collar de la Núria [Núria’s Necklace] by Cèsar August Jordana, which appeared in 1927. Written in the tradition of Wilkie Collins and Doyle, this novel centres on the theft of a pearl and diamond necklace belonging to a wealthy heiress, Núria. Initially investigated by two Catalan amateur sleuths, a British detective, Mr Fog, is hired to solve the mystery. With Fog’s arrival and Catalan pride on the line, the novel becomes an undeclared race between the Catalan amateurs and the British professional. 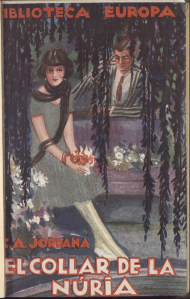 Following Jordana, Mercè Rodoreda, one of the most important Catalan writers of the twentieth century and author of La plaça del Diamant [In Diamond Square, translated by Peter Bush], also experimented with the genre, publishing Crim [Crime] in 1936. Set in an isolated house on the outskirts of Barcelona, Crim features a host of unusual characters ripped from the world of the English clue-puzzle novel, including a genial novelist, a beautiful, evocatively-named aristocratic widow called Lady Body, two dancers, a dashing sportsman and playboy, a Chinese butler, and finally the detective, Inspector Flac [Skinny], who parachutes in from Madrid to solve the mystery. The title – Crim – is somewhat of a misnomer, for there is no crime to speak of, as the victim is a shoe which has been stabbed by a Senegalese dagger. Although a parody of the English manor house mystery, Rodoreda also presents a critique of an arbitrary, meddling, centralised authority based in Madrid, a critique that in later Catalan crime novels would become more evident. 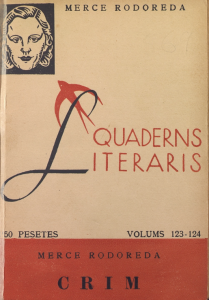 This tentative beginning to the crime genre in Catalan ended with the publication of Rodoreda’s novel. The Spanish Civil War (1936-39) and the right-wing dictatorship of Francisco Franco that followed it until 1975 hindered the development of Catalan crime fiction as it did Catalan culture more broadly through prohibitions and restrictions against the public use of the language and the publication of works in Catalan. 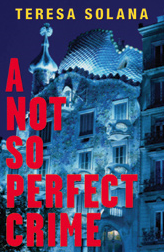