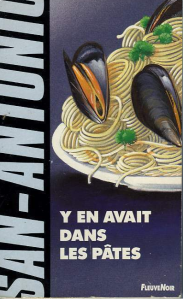 CFP sent by Jean Anderson, Carolina Miranda, and Barbara Pezzotti
Following our recent projects The Foreign in International Crime Fiction: Transcultural Representations (Continuum/Bloomsbury, 2012; see information available at www.continuumbooks.com/books/detail.aspx?BookId=167802&SubjectId=997&Subject2Id=927) and Serial Crime Fiction: Dying for More (forthcoming 2015, Palgrave McMillan; see http://www.palgrave.com/page/detail/serial-crime-fiction-jean-anderson/?K=9781137483683), we invite interested scholars and specialists to contribute to a planned volume on crime fiction and food.  We envisage including studies of print, television, and film series and are keen to consider a wide range of authors, countries and time periods. The category ‘crime fiction’ is here understood in the broad sense i.e. detective, spy, mystery and thriller.
For Barthes ‘an entire “world” (social environment) is present and signified by food’ (2008, p. 32); for Lévi-Strauss, eating is more than feeding oneself: to eat is to enter a system of signs and symbols that shapes one’s collective identity (1964). As Flandrin and Montanari assert in Food: A Cultural History from Antiquity to the Present (1999), food plays a critical role in society, particularly from a cultural perspective. Food is becoming an increasingly important element in international crime fiction. ‘[D]epictions of daily life, clothes, foods, houses, transportation, social activities, and more’ are a crucial tool in constructing the ‘authenticity of the various periods’ (Scaggs: 2004, p. 4). According to Verdaguer ‘mentions of food and cooking tend to complement the social backdrop of the story and reveal the milieu described by the author, very much in a nineteenth-century tradition of realism’ while ‘reflecting the cultural orientation of novels, which range from ethnocentric to multiethnic’ (2001, p. 187). It may be a key element in exotic or exoticized representations of foreign lands. Likewise, it may contribute strongly to the characterization of the protagonist.
In addition to providing realistic settings and playing a prominent role in representing the life and social habits of the society under investigation, food may also feature in entertaining moments in otherwise suspenseful and dramatic narratives. Above all, the representation of convivial aspects and eating rituals can also be constitutive of discourses about cultural belonging, sex, gender or class.
Possible sections may include but will not be restricted to:
·         Ethnicity and/or exoticism and food.
·         Nationalism/Regionalism: food as a marker of identity.
·         Gender and generation (don’t cook, can’t cook; you are what you have in the fridge).
·         Food as a weapon.
·         Crimes against food/food terrorism.
Schedule: Proposals of approximately 500 words, a short bibliography and a 50-word author note should be sent by 15 October. Selected proposers will be notified of selection by 15 November. Full article of no more than 5000 words, including bibliography and notes, should be sent by 28 February 2016.
Please send all inquiries and initial proposals to: carolina.miranda@vuw.ac.nz
Best wishes,
Jean Anderson, Carolina Miranda, and Barbara Pezzotti
Bibliography
Barthes, Roland. ‘Toward a Psychology of Contemporary Food Consumption’, in Food and Culture: A Reader. Carole Counihan and Penny Van Esterik (eds), New York: Routledge, 2008, pp. 20-27.
Do, Tess. ‘Food and Crime Fiction: Two Complementary Approaches to the Vietnamese Past in Tran-Nhut’s Les travers du docteur’, in Edible Alterities: Perspectives from La Francophonie (Special Issue), PORTAL Journal of Multidisciplinary International Studies, vol. 10, nr 2, July 2013.
Kranjenbrink, Marieke and Kate M Quinn (eds.). Investigating Identities: Questions of Identity in International Crime Fiction. Amsterdam/New York: Rodopi, 2009.
Scaggs, John. Crime Fiction. London & New York: Routledge, 2005.
Verdaguer, Pierre. ‘The Politics of Food in Post-WWII French Detective Fiction’, in French Food: On the Table, on the Page, and in French Culture. Lawrence R. Schehr and Allen S. Weiss (eds), New York: Routledge, 2001, pp. 184-202.
Winks, Robin W. (ed.). ‘Introduction’, in Detective Fiction: A Collection of Critical Essays. Englewood Cliffs, NJ: Prentice-Hall/Spectrum, 1980, pp. 1-14.