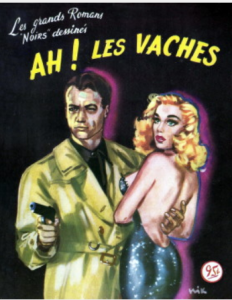 Belgian publisher Roger Dermée, in one of his fated post-war ventures in Paris, published in 1953 with Presses Mondiales a series of 48-page booklets, priced at 95 cents, entitled “Les grands romans noirs dessinés“. These were comic book adaptations of novels written by French authors using American-sounding pseudonyms and originally published in other series. Translating these novels into comics was a way of taking  noir literature’s commitment to a visual narration literally. The pictorial form was always going to emphasize the already graphic depictions of lust and violence in the novels. As such, it inevitably caught the eye of censors. It was also difficult for artists to meet the short deadlines for the graphic adaptation of a full novel. Having completed a text, they could then discover that the publisher no longer existed, nor could pay them, and that a legal suit had been opened against their work and its alleged obscenity.