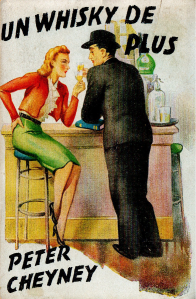 Peter Cheyney, the first author published in the Série Noire, was, more than any other at this early stage of the noir genre, responsible for disseminating the equation:  Noir = Violence + Alcohol. His hard-hitting protagonists used to hit the bottle just as savagely as the villains they encountered. Cheyney is often considered to have made the consumption of whisky fashionable in post-war France. END_OF_DOCUMENT_TOKEN_TO_BE_REPLACED