In a short passage which appears at first glance to encapsulate his populist views on art, bestselling French crime author San-Antonio likens the British Museum, which he professed to hate (“that most abhorrent place on earth, the most sinister ! A quintessential cemetery!”) to the Paris train station Saint-Lazare “with its smell of coal, pee and sweat”. While, according to him, in the Museum’s  “cold light, the work of men becomes inhuman”,  Saint-Lazare station, “full of cries and kisses” reminds him, “with its black beams that crisscross in the smoke” of “a drawing by Carzou”  (San-Antonio, Y’a de l’action,  Paris, Fleuve Noir, 1967; see the original French below).

The contrast staged by San-Antonio is not only, and maybe not primarily, between museums and stations; the former as sites of conservation of bourgeois culture and the latter as spaces devoted to circulation and work. Stasis versus movement, history versus the present, canonicity versus the everyday, this is all but one side of San-Antonio’s position on art as he expresses it here. The reference to Carzou actually points to his interest in urban landscape art, and the Paris School of Painting, two important aspects of the author’s aesthetical horizon.

The loosely defined term “Ecole de Paris” was coined by art critic André Warnod in a 1927 article to describe the works of  various Paris-based artists, many of whom were born outside France. In 1941 Warnod wrote a foreword to Equipe de l’ ombre,  the second full novel by the 20 year-old F. Dard, who would later become known as San-Antonio. Even in the later mass market paperbacks which he would write under this pseudonym, Dard would always be careful to leave traces of his connections to the art world. It is no coincidence that San-Antonio choses Saint Lazare station to make his argument about art. For (besides the fact that this station was for many years San-Antonio’s, as for many banlieusards from the western suburbs, gate into Paris) la Gare Saint Lazare is a recurring inspiration for the postwar painters associated with the Ecole de Paris, from Vieira da Silva to Carzou and Buffet. Following the influential painting Le Pont de l’Europe (representing a bridge over the tracks of Saint Lazare station) by impressionist Gustave Caillebotte (this painting is famous for its shifting, unnatural perspectives, depth of field, and gridlock vision dominated by iron structures) the station has become a site used to represent modernity. Its evocation by San-Antonio therefore contains a statement about representation and his own perception of cultural visions of modern life. 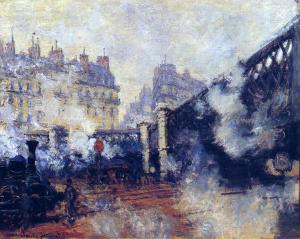 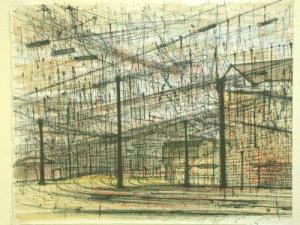 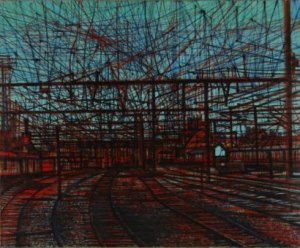