The French actress Michèle Morgan  died yesterday in Paris, aged 96. She was the last great surviving icon of the  age of Poetic Realism.  This distinctively French  expressionist  style and mood from the 1930’s anticipated Film Noir. Her early screen persona was that of a teenage femme fatale (most notably as Nelly, in  Carné’s 1938  Port of Shadows and in Grémillon’s  Stormy Waters,  for which filming started in 1939 ). This image captivated generations of movie goers,  and film makers. The mythic aura she instantly acquired became a kind of curse as the  decades went by.  Morgan seemed increasingly trapped in the distant past of a disappeared world, in a cinematic moment which had been nostalgic to begin with.  Most memorably, she starred in movies by classic poetic realist and noir directors, such as Marcel Carné, Jean Grémillon, Julien Duvivier and Yves Allégret, but also in films by Jean Delannoy and Michael Curtiz. Missing out to Ingrid Bergman for  Casablanca, she co-starred with Humphrey Bogart and Peter Lorre on another Curtiz directed war Film, Passage to Marseille. 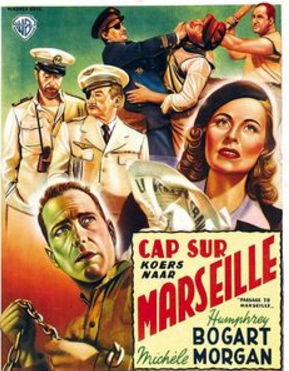