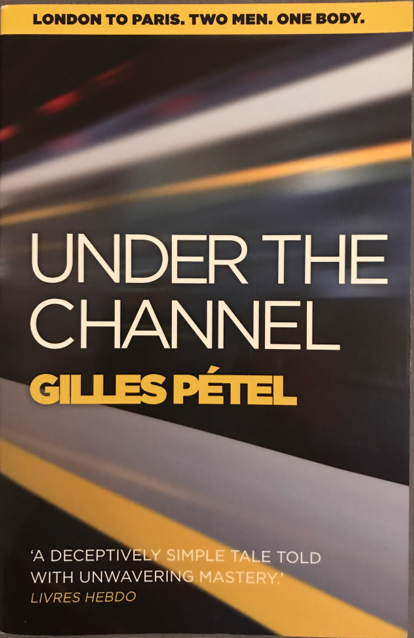 A book review by Eugen Kontschenko

In Under the Channel, Gilles Pétel tells the story of Roland Desfeuillères, a French police officer, who is assigned to investigate a murder inside the Channel Tunnel on a Eurostar train ride from London to Paris. Experiencing several hardships in his marriage, he takes the opportunity to flee from his troubles with his soon to be ex-wife, and travels to London to find out more about the mysterious victim. As he tries to uncover and understand the secrets of the victim, he also begins to discover a different side of himself.

What makes a novel dealing with a crime a good crime novel?  Certainly, Pétel succeeds in evoking various elements of the genre. The premise, reminiscent of Agatha Christie’s 1934 classic Murder on the Orient Express, as well as dozens of other murder mysteries set on a train, is promisingly enough considered from the angle of an international police procedural; a dead body found between two international police jurisdictions. There are also many other thrilling ingredients such as an unusual method of murder that leaves almost no traces and a victim surrounded by one too many secrets, which all seem to make for an engaging whodunit. On top of this, we have a highly experienced police lieutenant, who in his private life is struggling with his marriage and a cross-border police investigation destined to create tension and suspense due to clashing cultural and national sensibilities. Despite these promises, the novel is marred by issues which distract the reader, and will probably even leave her somewhat dissatisfied.

The novel loses itself in superfluous details. Desfeuillères’ failed marriage could provide more depth to the character and serve as an intriguing side plot. Instead, the author seems to use this backstory unnecessarily and excessively, constantly falling back to mentioning pieces of it when it contributes little to the story. The same could be said for Desfeuillères’ efforts to make sense of the case as well as to make sense of his personal problems: while his descent into a growing midlife crisis makes for interesting noir soul-searching, it seems to overshadow the crime story instead of complementing it. The book as such appears to be not primarily a crime novel, but a drama about a cop trying to discover his true identity.

Even dramatic episodes do not necessarily grab the reader as the book does not provide any positive characters with whom readers can identify. Every character has a negative and immoral side, which often seems disturbing. Desfeuillères has many issues, beyond the marital ones and he fully neglects his superiors and children during his stay in London, while engaging into various sexual activities and alcoholism. His wife, meanwhile, begins an affair with his subordinate. Other side characters are unsavory: the elderly couple who finds the body on the train does not want to report it at first, but change its mind in order to get into the newspaper. The French police, instead of pursuing the case, presume the couple to be drunk tourists and forcefully arrest them for disturbing the peace. It seems as if that the novel oversteps the mark in the attention it pays to the portrayal of morally ambiguous characters.

All these issues are amplified by the slow pace of narration. Every character seems to be inexplicably waiting for something, whether it will be the victim waiting for the train in the beginning of the novel, or Desfauillères waiting for appointments in London. This needlessly lengthens the novel while lessening the motivation of the reader. While the slow pace might appeal to some readers who would relish the picturesque descriptions, it does make finishing the novel more challenging than it needs to be.

Despite having a great premise, the novel should not be seen as a typical crime novel. Bringing many subplots into it makes it lose focus, transforming the book into a character-driven drama with crime elements. Even though this mixture could prove to be interesting and engaging, it is hindered from being so by despicable characters and a slowly progressing plot. Under the Channel tries to be many things at once, but just ends up too entangled in its promises.