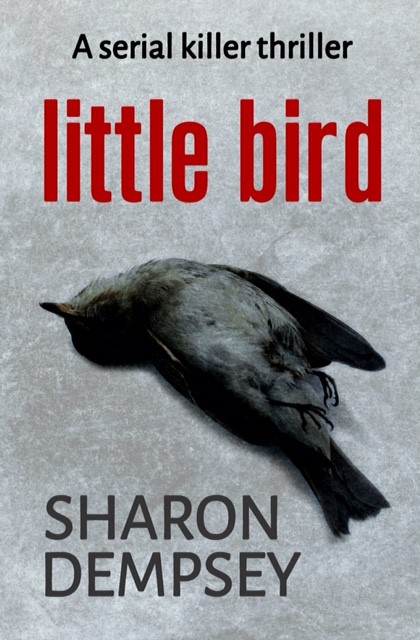 [Dominique Jeannerod] Your debut novel appears today,  published by Bloodhound Books.  Could you tell us what Little Bird is about?

[Sharon Dempsey] Little Bird is primarily about loss: loss of a loved one, loss of identity, loss of connection.  It interests me to create broken characters and push them to the extreme and there is plenty of scope for that within the crime genre. As Ian Rankin once said you can do anything within the crime genre. It offers up all sorts of possibilities and allows you to have characters from different socio-economic backgrounds to interact. Crime and tragedy doesn’t only affect one sector of society. We are all vulnerable.

As far as the blurb goes the story concerns forensic psychologist, Declan Wells, who is dealing with the aftermath of a car bomb, that has left him in a wheelchair. Ten years after the car bomb his daughter is found murdered at a family wedding and Declan finds himself propelled into a nightmare of grief and desperation as he tries to find his daughter’s killer. Welsh Detective, Anna Cole is running away from a dead-end relationship and guilt over her mother’s death. She hopes secondment to the Police Service of Northern Ireland will provide distraction.  There is a killer on the streets targeting young women and leaving behind macabre mementos to taunt the police. Declan and Anna work together to try and solve the case before the killer strikes again.

[DJ] What aspect of the novel in particular did you think might capture the readers interest the most?

[SD] I suppose the idea of Declan being so damaged, both physically and emotionally, and then dealing with the loss of his daughter was something which appealed to early readers.

I am drawn to damaged characters who despite their difficulties are compelled to keep going. Declan’s grief is harnessed to propel him onwards. He can’t rest until he knows who has harmed his daughter. The killer’s penchant for the macabre is also going to pique interest. I don’t want to give too much away but he has a strange hobby!

[DJ] How did you come to write it? What was the original idea? When did you first think of the subject?

[SD] The original idea came about at a family wedding. I was leaving the party at around eleven; it was a gorgeous balmy night and we were in the countryside. As I was walking to my car I could hear the music coming from the dance floor, laughter and chatter, and it suddenly occurred to me that this was a great place to set a murder. I wrote the first murder scene the following week but like many ideas I let it rest for a while and then slowly the story started to form.

[DJ] You studied Politics and English at Queen’s; how did your choice of studies prepare you to write crime fiction?
[SD] Crime writing feels like coming full circle in many ways and the crime novel is an ideal arena to explore issues of corruption, social exclusion, and identity. The study of Politics is concerned with how we organize society and make it work, the ideologies that form the basis of our governments; whereas, in studying English literature I was more interested in the individual and how we respond to the world around us and find creative expression.

[DJ] Was it easy to find a publisher for this first novel? How did you pitch it?

[SD] It is never easy to find a publisher. The road to publication is paved with rejection letters. I had an agent for a while which was great regarding editorial feedback but at the final hurdle I felt let down. I made a submission pitch on my own to Bloodhound Books and they came back offering me a deal. They have proved to be fantastic to work with.

[SD] I love Irish Noir – North and South. Northern Irish crime writing has really come into its own. Writers like Adrian McKinty, Brian McGilloway and Stuart Neville have led the way. We are a society ripe with stories and now, post-conflict, is the time to tell them. I feel strongly that exploring society through a fictional lens is the best way to get to the emotional truth.

[DJ] Do you consider contemporary Crime Fiction set in Northern Ireland rather as a subspecies from Irish Noir, or as a relative of the “Troubles Thriller” or as a subgenre in its own right? What are its specificities, compared with “Emerald Noir”, “Tartan Noir”, or any other forms of regional and rural noir?

[SD] Genre specific labels don’t bother me. A good story is a good story. Kelly Creighton’s The Bones of It doesn’t have those sorts of limitations.

But I do think our Northern Irish crime writing is distinctive from the Southern Irish stories. We have lots of crossover, the same with Tartan Noir and novels like Joseph Knox’s Sirens set in Manchester. Each region has its own dialect, its own challenges and its own brand of humour. The Troubles Thriller sounds a bit reductive but for publishers it has a great catch. As far as the specifics of Northern Irish Noir I think we are fortunate, if that is the right way to put it, to have the Troubles as backdrop. We can explore a damaged society and see how it has been affected by living through turbulent and violent times. The tropes of the paramilitary hold over communities, the double-crossing agents of the state, the riots and the bombs all provide an ambient backdrop.

[DJ] Who are the writers whom you read most, before and while writing your novel?

[SD] Tana French can do no wrong. I love her murder squad series. Faithful Place was my favourite. Louise Phillips writes great killers. Her multi-narrative voices always make for a good read. I also love Stuart Neville and Brian McGilloway; they have both been trailblazers for Northern Irish crime writing. Adrian McKinty’s dry wit is quintessentially Northern Irish and he uses it to great effect. I love John Connolly for his short stories and novellas. There are also stand out books that have stayed with me over time: Thomas Hardy’s Jude the Obscure, A Little Life by Hanya Yanagihara, Tender by Belinda McKeon, and Margaret Attwood’s Alias Grace and The Hand Maid’s Tale. This year, I also thought Jane Harper’s Dry was a stand-out crime novel.

[DJ] Who are the authors you met in person and with whom you discussed your work?

[SD] Southern Irish crime writer, Louise Phillips has been a major influence on my work, not least because she mentored me throughout the writing of my first draft. I have always been a fan of Louise’s books so when I was successful in being awarded a grant under the Support for the Individual Arts Programme from the Arts Council NI, I used the money to engage in a mentoring programme with her. She read the first 10, 000 words and was very supportive and said that yes, she would work with me. This meant that I had a reader early on; at every 15,000-word instalment, Louise read what I had written and offered her advice. She was wonderfully supportive and I don’t think I would have completed the book without her encouragement. The Arts Council award also meant that I had a deadline to work to. I had to submit the finished manuscript to them within nine months so it was a great incentive to finish it. The award was also a great validation in me and my work and when you are writing your first novel, without a publishing deal that validation really helps you to keep going. Writing can be a lonely profession, if you allow it to be. By actually saying, I want to write and this is what I have done, I have been amazed at the community of support on offer. There are great book events to get involved in, from the Belfast Book Festival at the Crescent to the regular launches at No Alibis.

[DJ] One can perceive a gender imbalance in the population of Northern Irish Crime Writers. What do you think are the reasons for that? Is there a chance that changes are coming, with your generation of women crime authors ? And how could such changes impact stories told about this place, and crime fiction in general?

[SD] Yes, the male writers have to date been leading the charge up North, whereas down South the female crime writers have been selling extremely well. I do think this is about to change for Northern Ireland. Kelly Creighton, Catriona King, Claire McGowan and myself have plenty to say and our stories stand up. The gender imbalance is strange but there has been a sense that during the Troubles we were all trying to get on with living; keeping our heads down. There was so much violence and crime reported daily that we were almost fatigued by it. I certainly didn’t want to write about it until later. It has been said that women write about violence and menace so well because we truly understand fear and the sense of threat. Now is the time for the Northern Irish female voices to be heard and for our stories to take their place alongside our male peers.