The International Crime Fiction Research Group, based at the Institute for Collaborative Research in the Humanities in Queen’s University Belfast, was created in 2013. It brings together scholars from disciplines such as literature, film studies and cultural history. Its principal aim is to organise a series of initiatives themed around issues relating to the international genres of crime fiction, in order to establish long-term collaborations with other UK and European scholars and Libraries. It will involve crime authors and series editors, and other stakeholders in the circulation of crime fiction, such as publishers, critics, translators and specialised retailers. It builds on a series of conferences held to date by the Ireland-based International Crime Genre Research Network, in partnership with Dr Kate Quinn (University of Galway) and Dr Marieke Krajenbrink (University of Limerick) in Galway (2005), Limerick (2007), Cork (2009) and Belfast (2011). 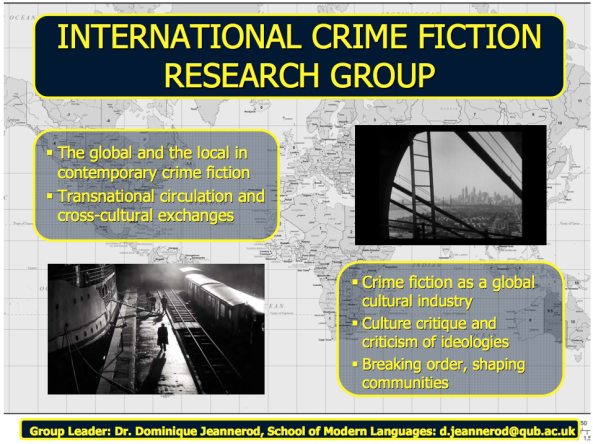 The group’s leading research programme investigates processes of international circulation and exchanges in the crime genre. Based on quantitative analyses and on qualitative readings, it investigates phenomena of translation and imitation between the leading modern cultural industries in which the genre was developed in the 19th Century (in the US, France and the UK) and their importing into, and appropriation by other cultural areas. It seeks to assess trends and influences, as well as the genre’s tensions between conforming and diversity in different languages, literatures and cultures. The research group will therefore include studies of acculturation, dissemination and will measure the success, both commercial and critical, of works of crime fiction from various cultural areas, in and outside Europe.