The Research Fellow will be an active member of the European-funded project “DETECt: Detecting Transcultural Identity in European Popular Crime Narratives”, by assisting in the development of research proposals and the planning and delivery of the research activity within a specified area so that the overall research objectives of the project/school are met.

The successful candidate will form part of a cross-disciplinary research team working with staff in Film, English, French and Geography.

The post relates primarily to the Work Packages “Creative Industries” and “Creative Audiences”, one of eight sections of the project, specifically focusing on the study of the production, distribution and consumption practices of European crime narratives in the fields of the film and television industries. END_OF_DOCUMENT_TOKEN_TO_BE_REPLACED

With thanks to Benoît Tadié

END_OF_DOCUMENT_TOKEN_TO_BE_REPLACED

Most frequent words in the first chapter of Arab Jazz (Viviane Hamy, 2012), click to enlarge

Arab Jazz, Karim Miské’s multi-award winning novel tells the story of an avid reader. Ahmed is a 21st century Don Quixote, who lives in Paris’s multicultural 19th arrondissement and reads modern chivalric romances;  or, in other words, Crime Fiction as Chandler told us. He buys books by the kilo, and stores 2.5 tonnes of them in his flat. His local bookshop is the pharmacy where he finds the remedies for his soul. Sure, these remedies contain a dose of poison too. But he needs them, as the horror and the sick imaginations of others allow him to keep the monsters inhabiting his own head at bay. Some of the books are memorable: Ellroy, Tosches, and Manchette. They rank in his consciousness alongside other considerable books, by Baudelaire, Van Gogh, Artaud, and Debord. He equally reads “vast quantities of Anglo-American industrial thrillers, by Connelly, Cornwell, and Cobain; their names are a bit mixed up in his head”. He often gets the impression that he is reading the same novel, over and over again; which is exactly what he is looking for. He wants to forget about the whole world and immerse himself entirely in a continuous narrative written by others. Until one day a girl’s blood drips down onto his clothes, and real crime re-enters his life.

Karim Miské will read from Arab Jazz at Belfast Book Festival, on Tuesday : 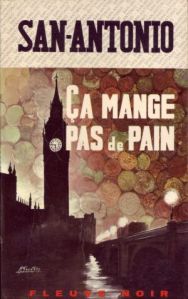 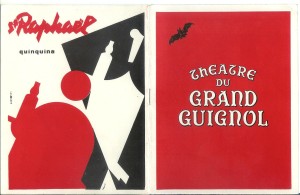 Frédéric Dard was France’s most popular Crime Fiction author.  Besides his career as  a novelist, Dard was a prolific playwright, screenwriter and dialogue writer. The recent discovery  and subsequent publication (EUD, 2015) of an original manuscript of the  successful Play Les salauds vont en enfer  allows to retrace the circuits of cultural creation in 1950’s France and the interrelation between various  media and narrative forms.  Created in the Grand Guignol Theatre in Paris in 1954 and directed by Robert Hossein, the play went on to experience  a series of  transpositions. First, in 1955, on screen (also directed by Robert Hossein), then as a novel, when  in  early 1956,  it was novelised as a roman noir by Frédéric Dard, the author of the play.   In 1971, Abdal Iskar adapted it as television film.  A wealth of archives, generously shared by collectors  and the author’s  family  have helped reconstructing  the story of the play’s reincarnations and exportations.  But working  closely on the text of the play  for this first edition (six decades after it had been written) also highlighted the  importance of the international  and intermedia horizons in the creation, as they are both already  there in the author’s inspiration.  Most  of the following pictures, which document the variations  and interpretations from media to media and in different countries, are reproduced in this edition, where they are fully referenced. END_OF_DOCUMENT_TOKEN_TO_BE_REPLACED

Dell books paperback comprised different populargenres, from the Western to the adventure and the sentimental novel.  But  half  or more  of them were crime fiction. The maps on their backs merges visually all these genres. After all, the four of them can, to an extent, rely diegetically, figuratively or at least metaphorically on sketches and raw drawings (Treasure island map, carte du tendre, maps of a crime scene or croquis for a heist). More than 250 Dell Books Mapbacks  were actually Crime scenes.  Crime Scenes without crime, without traces of violence, and almost always without people. A pure material and geographical world.  Put all together, they display a great sense of continuity,  attributable to the unity of style and colours in the work of artist Ruth Belew (who, according to Gary Lovisi, drew more than  150 of them). The wild, unruly, imaginary space of Crime Fiction looks here tamed, domesticated. Pleasant, harmonious, and perfectly defined squares look like the parts of a puzzle. A puzzle reassuring both in its nature as a game, and for its apparent completeness (although it would be interesting to inspect the spaces, states, counties and countries which are not represented). END_OF_DOCUMENT_TOKEN_TO_BE_REPLACED

With thanks to Benoit Tadié

The crime scene map is a  feature commonly associated with  1920’s  Crime Fiction.  Detective novels of the Golden  Age tended to favour the spatial representation of  the mystery to be solved. The maps appended to the novels were data visualisations, as they presented the plot in one  easy (and appealing)  overview. Typically,   a locked room mystery, or a  secluded place mystery  (remote manor, island, lighthouse…) could handily be mapped on one page. Such cartographic paratexts not only accompanied the novel, but often preceding it,  they led into it. They were printed in the first pages of the volume, and at times on the cover itself,  inviting the reader to a symbolic and cognitive journey.  They  helped visualize the information relevant to the solution of the case presented in the book.  But at the same time, as they established a sense of location, they dematerialized it into a projection, and  an abstraction.  They became  thus metaphors of the detective novel as an intellectual construct. Imaginary, simplified spaces, stages for schematic problems, disconnected from referential realities.  This view was further corroborated by Chandler’s dichotomy, distinguishing between  the realistic, gritty, hard-boiled genre, which he and Hammett represented, and the delicate, but ultimately insubstantial, de-realized Mystery genre incarnated by Christie, Carr, Sayers and co.   Associated  with  golden age detective fiction,  maps would then paradoxically seem, from this point of view too,  to indicate less referential substance, rather than more. END_OF_DOCUMENT_TOKEN_TO_BE_REPLACED 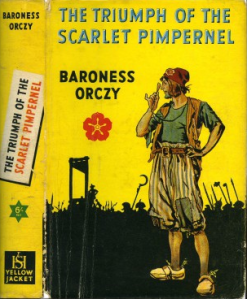 A direct predecessor of  “Le Masque”‘s and “Giallo” Mondadori’s distinctive yellow covers, Hodder & Stoughton’s “Yellow jackets” series  published crime fiction, from 1926 and throughout the 1930’s. Crime  thrillers by popular authors such as Edgar Wallace and John Buchan were published there . So were, from 1928, those by Leslie Charteris: this is where all fifty novels in “The Saint” series were published.

Making the link between the original 19th Century railway Library “Yellowbacks” and the fad for giallo (yellow becoming -before noir,  the colour of crime fiction) all over Europe, this series of  bestsellers  anticipate crime fiction paperbacks. While this particular series found an end in the late 1930.s, a new yellow Series was launched in 1949 with the same publisher. END_OF_DOCUMENT_TOKEN_TO_BE_REPLACED 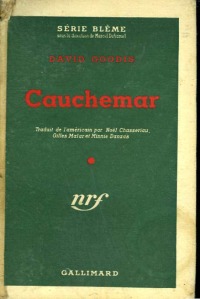 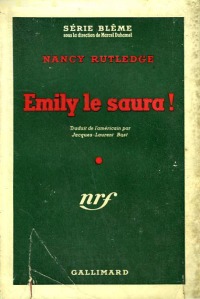 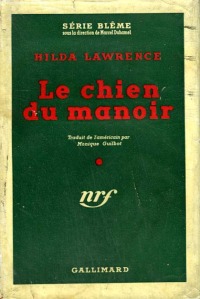 Gallimard’s ill-fated Série Blême  (1949-1951) is one of the most elegant and attractive Series of Crime Fiction. It is also one of the most  prestigious, and appealing, literarily.  It shows the dedication of the Series’ general editor, in his role as a selector of texts.  Publishing a series is an act of mediation. It involves mediating between authors (carefully chosen on the basis of a set  of objective and subjective criteria) and readers, whose taste the series seeks to educate. In this case, Marcel Duhamel (also the editor of the Série Noire)  was committed to  highlight through this series a literary evolution he saw  within the noir genre.  The evolution from the early Black Mask “hardboiled” stories, driven by the action, to a more subjective, introspective and psychological thriller, the novel of suspense. END_OF_DOCUMENT_TOKEN_TO_BE_REPLACED