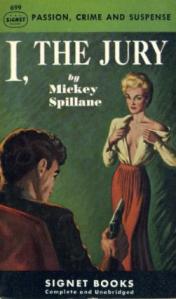 The New York based publisher, The New American Library was formed in 1948 and soon became the biggest American publisher of paperbacks. Both of its founders, Kurt Enoch and Victor Weybright had experience with the European pioneers of the mass market paperback industry, the British Penguin and the German Albatross, which Enoch had launched  in 1932 and directed. Signet fiction was a particularly successful imprint of The New American Library. The paperback reprints it published included (but were by no means restricted to) a number of classics in the noir genre. The series’ distinctive visual style owed much to the influence of the artist James Avati. Dubbed “The Rembrandt of Paperback Book Covers”, often reminding one of Hopper’s bleak style, he drew many of the series’ covers and inspired the other illustrators commissioned by Signet.