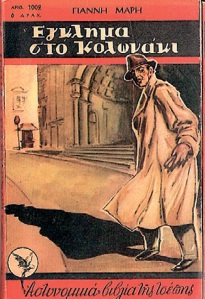 Crime fiction in Greece is characterized, on the one hand, by the strong influence of American and European classics and standards, and on the other by a constant search for a more localized expression. This initial reception of a new literary genre and its final assimilation is an idiosyncratic characteristic of Modern Greek culture, which was shaped by accepting both eastern and western influences. Thus, when crime fiction was introduced as a new genre to Greece, during the first decades of the 20th century, readers were already familiar with its main elements, because one of its precursors, the “roman feuilleton” (or serial) was very popular in Greece during the 19th century, as in other European countries. END_OF_DOCUMENT_TOKEN_TO_BE_REPLACED