Philippe Honoré was killed yesterday in Paris. He was one of the victims of  the attack on Charlie Hebdo, the bloodiest terrorist attack in the French capital since 1835’s “machine infernale” on the Boulevard du Temple. He was loved by French Fans of Crime Fiction, who found his drawings in Charlie Hedbo, and in publications such as Le Magazine littéraire,  Le Monde and Les Inrockuptibles. In the monthly mainstream literary magazine Lire, he published his famous Rebus, the  “Rébus d’Honoré”. They mainly consisted in pictograms representing names of authors, title of literary works, or famous quotes in rebus form. The following (see below) is for example Honoré’s representation of the American inventor of Crime Fiction. END_OF_DOCUMENT_TOKEN_TO_BE_REPLACED

Cabu, Charb, Honoré, Tignous and  Wolinski were killed today in Paris, together with 7 other victims. It is as if somebody wanted to tear off pages after pages of the history of illustrated press.  Stating that their names are legendary does not  begin to describe how important and influential they were for generations of readers and illustrators in France. They were cartoonists, satirists,  artists and journalists.  Cabu, and Wolinski  have been with many of us ever since we could read. They used to make us laugh loud. This is the first time they make us sad. The BNF, the French National Libray, had devoted an important exhibition, in 2012, to a retrospective of Wolinksi’s rich and very diverse career. His association with Crime Fiction  manifested itself in his illustrations for the book covers of the San-Antonio Series in the late 1980’s and early 1990’s. Each of these books sold at the time 600 000 copies.Wolinski’s iconic drawings were recognised by millions. Readers and admirers  of his dozens of albums and collaborations to some 40 newspapers are in shock and disbelief. 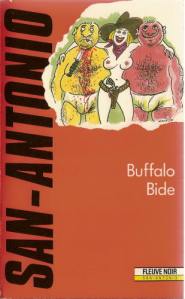 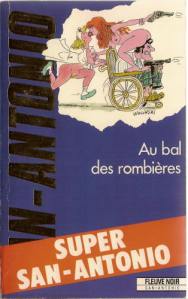