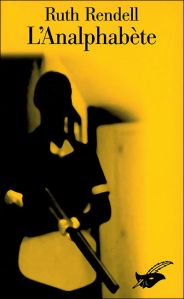 Ruth Rendell, who died yesterday, was not only  one of the most distinguished English crime fiction authors, the impeccable writer of more than 60 best selling books  (25 of them featuring Inspector Wexford – often presented as a British Maigret-  and 14  written under the pen-name Barbara Vine).   She was a peer for the Labour Party in the British Parliament. Her attention for the social context and the particular settings of her novels was commanded for modernising British Crime Fiction.

Her 1977 novel A Judgement in Stone (London, Hutchinson) begins with the line :  Eunice Parchman killed the Coverdale family because she could not read or write.  This is a cool statement about the Crime genre, saying that it is not just about  to the whodunit.  And a  clear  indication that crime is a product of socio-cultural circumstances. Rendell  was comimtted to represent it that way.  The plot, and the social classes  antagonism it is based on (servant kills masters) is reminiscent of  a well-publicised French Criminal affair: the  savage murder of their employer by two young women, the sisters Christine and Léa Papin, two maids from Le Mans, in 1933. END_OF_DOCUMENT_TOKEN_TO_BE_REPLACED

The Ullstein Verlag, founded in Berlin in 1877, was one of the most  active  and successful agents on the market of entertainment publications in Germany. One year after Le Masque in France, and one year before Mondadori, in Italy, it too launched a series of yellow mass market Crime Fiction books : Ullstein Gelbe Reihe was started in 1928. END_OF_DOCUMENT_TOKEN_TO_BE_REPLACED

(Total number  of titles with exclamation marks, by series)

The following pie charts represent the  varied use of three types of punctuation signs in the titles of  all the novels published in the three longest series of Crime Fiction in France : Le Masque (Librairie des Champs-Elysées), La Série Noire (Gallimard), and Spécial-Police (Fleuve Noir).  While the amount of books published in all three series is roughly comparable (all three series have published more than 2000 books each), there are manifest discrepancies in their use of punctuation marks. END_OF_DOCUMENT_TOKEN_TO_BE_REPLACED

The question this post  tries to  answer visually is twofold, and runs  as follows.  Is it possible, first,  to visualise the denotations and connotations carried in the  titles of crime Fiction series ? What are the words most frequently used ? And what are the emotions, atmospheres and tropes suggested already by the titles, on the threshold of the books ?  What are the most common elements forming part of the contractual promise contained in a title ?  Which ones seem to be recurring the most often? And second, do such patterns vary from series to series, reinforcing their distinctive identities?  Can one, after  listing  the literal meanings of the words most frequently used in their titles,  and the emotions associated with them,  determine the series’ s profiles ? In practice,  is it for example  possible to compare the three longest French Crime Fictions series (totaling almost 7000 books between them),  based only on the words most used in their titles ? Can one try to “profile” Crime series, on the basis  of the terms  through which the authors, and the series’ s editors choose to market the books ?  And which are the words which are more apt at representing each of the three series? The  three following pie charts reflect the frequencies of  six  heavily connoted and intuitively chosen words for each of the three series. END_OF_DOCUMENT_TOKEN_TO_BE_REPLACED